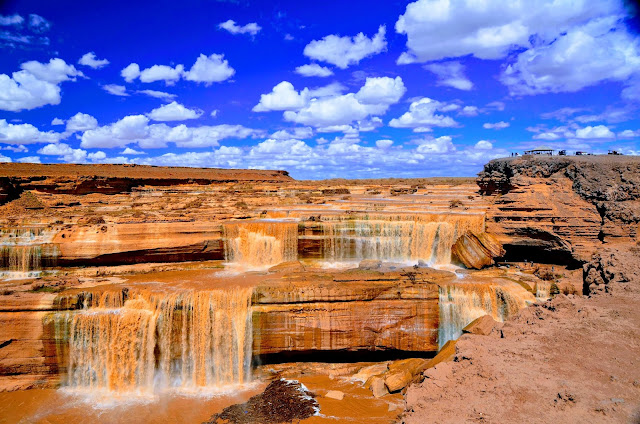 After years of seeing photos of Chocolate Falls and thinking "wow, that looks awesome, I wanna check that out sometime!"  I finally checked it out sometime!  It only took, like, a decade to put in the effort to Google "Chocolate Falls" and learn 1 - it's actually called Grand Falls, and 2 - it's just right outside of Flagstaff.  And thanks to photos popping up in my Instagram feed, I knew it was time to go.

Since this is a short day trip, use Gaia GPS to find some nearby hikes while you're up in the beautiful Flagstaff Area.

Grand Falls is a seasonal waterfall on the Navajo reservation east-northeast of Flagstaff.  It's primarily fed by snow melt and monsoon/rainstorm runoff.  Thanks to the insane snowfall Northern AZ has gotten this year it's flowing strong.  If you want to ensure that the falls are falling before making the trip up visit the USGS river flow rate page.  The Navajo Nation page about Grand Falls recommends visiting when the flow rate is over 100 cubic feet/second and if the flow rate is in the thousands to visit within 48 hours (I assume because it's especially epic at that point).

At least one site suggested a permit is required to visit the falls, but that is not the case.  It's open to all.  Despite that, here are some requests from the Leupp Chapter House of the Navajo Nation:  Please be respectful of the beautiful land when visiting. Do not litter. Do not off-road. Do not chase the livestock. Do not speed on the dirt roads. No ATV's allowed. No camping. No alcohol. 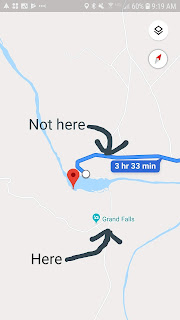 Now that you've determined the flow rate, directions are next.  You'll find that if you plug "Grand Falls" into Google maps, it'll give you a route...but it'll probably be the wrong route.  Maps will drop a pin on the south side of the falls, which is correct, but it route you to the north side of the falls, which is incorrect.  The frustrating part of this is Google Maps has a labeled location for Grand Falls in the correct location, but it doesn't use that for navigation purposes.  So once you've searched for Grand Falls zoom until you see the labeled location, select that, and navigate there From central Phoenix it's roughly a 3 hour drive.

Once you turn off Leupp Rd. you'll be on dirt roads that, on my drive, were EXTREMELY washboarded.  You'll find every rattle in your car, or create a couple if you didn't have any yet.  Pro tip for driving on washboards, there's an ideal speed to minimize the bumpiness of the road.  It's different depending on the actual road conditions and you might have to speed up through some of the bumpiest parts to get to that sweet spot where your tires are skipping across the tops of the washboards (like Super Mario running over 1-space gaps in the ground) instead of going up and down each undulation.  Having to slow to 10mph to pass was much rougher than traveling at 30-35mph. 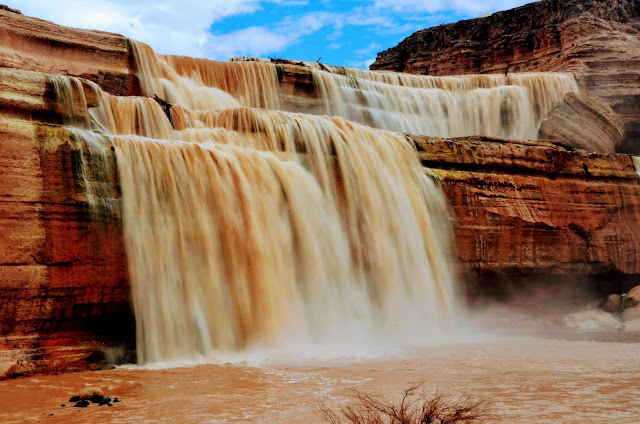 Many guides I read suggested a high-clearance vehicle to get to the falls.  I got there without issue in a Hyundai Sonata.  Other than the washboards, the road was just fine--though I'm sure after rain or snow that could change.  To be honest, the roughest part of the whole thing was the parking lot, where you'll need to use some caution around the rocks and bumps.  There are a couple parking areas, I chose the closest since the road to the lower lot got much rougher.  It added maybe .25 miles of walking to the adventure. 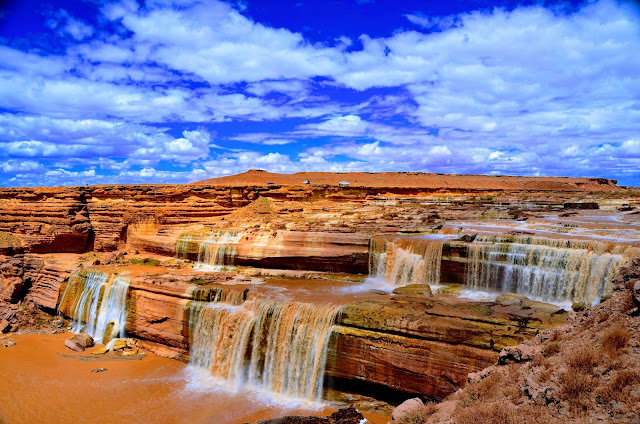 Now that you've braved 5 paragraphs about flow rate and direction, lets get to the important stuff!  Checking out the falls!  And MUD!! 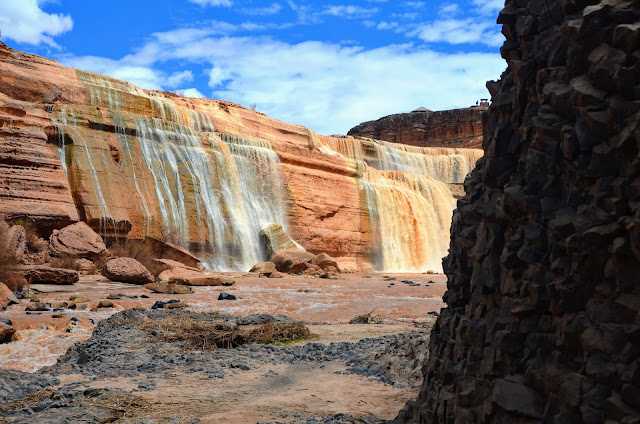 There are a couple covered viewing huts to shelter from the sun or rain.  I didn't find them necessary, and they weren't set up with the best views, but I could see them being nice for some evening long-exposures.  For the most part, though, you'll be walking along the canyon edge taking photos every few feet.  To the 12 o'clock position from the first parking area there is a trail leading to the canyon floor that'll take you to different viewing angles.  The trail is short and easy, but is rocky and has some incline.  It was accessible for all types and ages, just use caution if you're not used to scrambling around the outdoors. 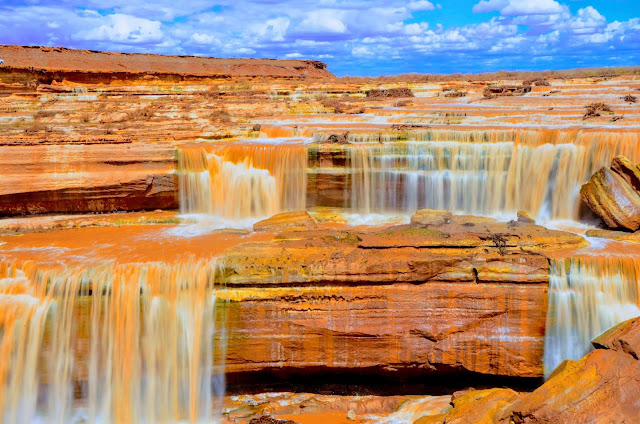 It's possible to walk your way back upstream to the falls and even climb to the lower tier, but the closer you get the muddier it is.  It's a clay mud that's very slippery and sticky, so watch your footing.  Also, be extremely careful if you're going to venture up the waterfall.  I had no cell service within 45 minutes of the falls so if things go wrong you might be without ability to reach first responders. 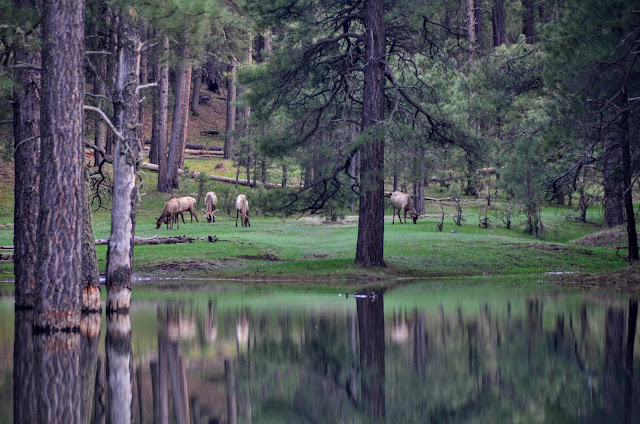