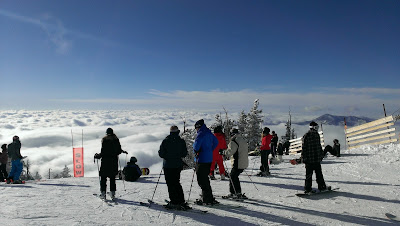 If you don't think of the words "Arizona" and "skiing" go in the same sentence in any scenario than a typo, you're probably not alone.  But, for being a desert state, Arizona has pretty decent skiing (it's no Colorado, but far better than the West Virginia slopes I grew up with).

Snowbowl in Flagstaff has the best combination of accessibility from Phoenix and good skiing.  It is abour 2.5 hours from Phoenix and there are signs to follow through Flagstaff to ensure you follow the right turns.  It is close enough that a day, or even afternoon, ski trip is not at all unreasonable.  In fact, I recently took a day off, left my apartment around 9:00, stopped for an early lunch, and started skiing at around 12:30 at the discounted half-day rate.  Afterward, I grabbed a quick bite to eat in Flag and made it back down to Phoenix in time to meet my friends for a late happy hour. Navigate here - 9300 N. Snowbowl Rd, Flagstaff AZ 86001

When you venture off the beginner's slope you should know that the rest of the mountain is divided into "the ridge" and "the bowl" - it's pretty self explainatory, but the runs on the far east side are on the ridge of the mountain, the runs that are more in the middle are in the valley, or bowl.  Use these terms to sound like you know what's up.  Don't worry about what the beginner slope is called, you shouldn't know it anyway. 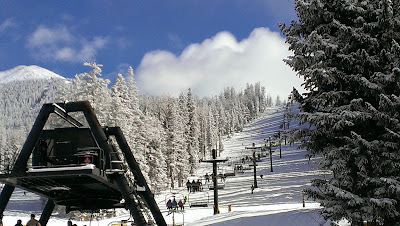 Getting around the slopes here can be mildly confusing because certain runs will deliver you out to a different lift than you took to get up and then you have to navigate the one or two routes that will take you back to where you started.  It's not actually difficult, but you might briefly feel like you fell into a skiing version of Groundhog Day when you find yourself continually arriving back at an isolated lift with no apparent way back.  Don't worry, you'll get back much easier than Bill Murray, and you won't have to experience an epiphany to do so.

Lately, the plans for Snowbowl to make snow has been a hot topic.  I'm not going to delve into the political/ethical/Native-American-spiritual issues, those are more of a 'belief' issue that I can't judge for you.  To the extent that the use of reclaimed water is in issue or a component of the issues, however, I would say that safety and environmental concerns seem to be hyperbole used to attack the use of the water.  Reclaimed wastewater is widely used throughout the country and is seen as a safe and environmentally friendly alternative to using fresh water for non-potable uses.  Indeed, it has been suggested that reclaimed water could be safer than groundwater because it has been treated whereas the groundwater could have any sort of chemical or biological impurities.

I could tell you all the stats about the mountain (elevation change, runs, skiable acres, etc), but, let's be honest, if that concerns you then you should be skiing in another state; if you're going to Snowbowl it's because you want a quick and relatively inexpensive ski trip.  But if you do want to know all the details, you can find them here.  http://arizonasnowbowl.com

Check the website before your trip, sometimes they have random deals and specials.  Last year there was a discount if you brough canned goods (which can be purchased on your way at a grocery store in Flag).