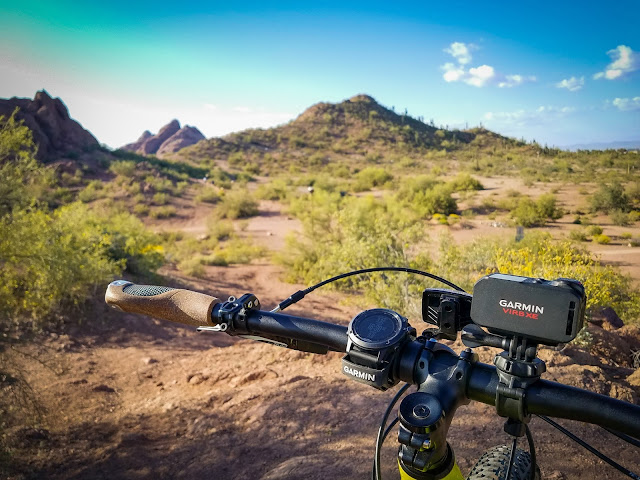 Papago is a convenient spot for an after-work ride and an easy spot for a beginner ride. It's trails are neither technical nor overly strenuous, though it is possible to seek out some areas of greater difficulty if you want to test your newly acquired skill and confidence. If you are in South Scottsdale, the Mill Ave area, or southeast Phoenix, the park is quickly accessible by car, or simply by biking the canal running down 64th Street. Park off Galvin Parkway on either the west side, or on the east side at the entrance to the Phoenix Zoo. There is also parking on McDowell road as it crests the hill, but this area is limited and is only accessible to eastbound traffic.

The park extends on both sides of Galvin Parkway and is filled with a web of trails. There is no shortage of places to ride, however the ride can become boring as a significant amount of time is spent making arbitrary turns down different trails that run through the same general area. What the area lacks in size and unique paths, it makes up for in its accessibility to beginner riders and the near impossibility of getting lost. One can easily unload their bike and set off to ride with literally no prior planning. If the park becomes boring, you can easily take the 64th Street canal up to the Indian School canal, or head over to the bike path along Tempe Town Lake that becomes the Scottsdale Greenbelt to the north. Alternatively, take your running shoes and go for a trail run or easy hike if you need a biking break.

If you go for a late afternoon ride, stick around to watch the sun set over downtown Phoenix through the popular "hole in the rock" (you'll see it) or climb atop one of the massive rocks to enjoy the sunset in privacy.
biking canal greenbelt mountain biking Papago Park Phoenix Scottsdale Tempe trail running